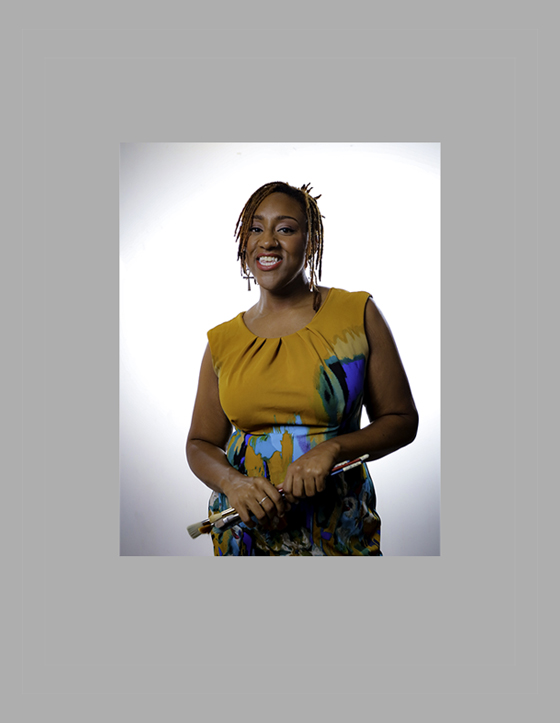 LANDIS CYRA ANDERSON, a self-proclaimed moonchild, was born in the middle of a thunderstorm in Manhattan, New York. She believes her affinity for powerful expressions and the sublime began that rainy night. A lover of art and self-expression from her drawing-on-the-walls years, to now, she earned a Bachelor’s of Art in both Studio Art and English from Grambling State University in Louisiana. While in college, Landis joined the second generation of artist-performers in the campus-known group Lyrical Quest as a poet. Along with other women writers of Lyrical Quest, she contributed works to the poetry anthology “So Lyrical, It Feels Spiritual” after graduation.

Now, a Houston-based mixed-media artist with a penchant for painting, she’s professionally known as Cyra the Artist. Storytelling is still incorporated in her artwork through empowering effervescent figures and portraits. Like the storm she was born into, Cyra believes her creativity surges and brings change within her audience. Her motivational mantra being “All that I do will be in service of my art” led her to becoming a member of the Hardy and Nance Studios family and the birthing of her dream: Visionary Grind Arts—a cornerstone of creativity where Black and Brown artists, and all lovers of art, can engage and connect. She plans to expand Visionary Grind Arts from a collective to an arts complex in the Houston arts district.

“My primary artistic concern is the enlightening discovery of self by providing a candid intimate encounter with the emotions and experiences of Black people.”

I ENJOY SPENDING TIME getting to know people from all walks of life. My interactions have taught me that Black people are judged prematurely, and often unintentionally. Most people have the same desire to be seen, heard, and understood—as Black Americans do—though they create distance and difference between us. I aim to influence self-reflection with my paintings. My art portrays Black stories, feelings and experiences. It depicts our beauty, strength, joy and pain—and the nuances between. I want my art to build a bridge between the spirit and emotions of people of African descent and those of people of other races and cultures; the goal of which is always empathy, understanding and respect. My primary artistic concern is the enlightening discovery of self by providing a candid intimate encounter with the emotions and experiences of Black people.

With a sense of intimacy and vulnerability depicted in my paintings, the audience is drawn to the inner-world of the highly melanated. I choose to paint my subjects realistically because I want them to look like real people; be seen as real human beings, not stereotypes and exaggerated caricatures. Cutout substrates aid in the storytelling aspect and context of my work. This is why I design and carve masonite board to house my figures. They play an integral role in how the painting is meant to be perceived. My aim is to have the audience question who the person in the painting is and how they came to be shown so expressively through art; to ponder what the cutout shape symbolizes in reference to the subject. Unexpectedly, the viewer can engage with the subject on a personal level, bridging a gap and forming a connection with a Black person in whom they see parts of themselves, or parts of themselves they wished they expressed.